Jonathan graduated from Lee's Summit High School in 1996 and played 2 years of Varsity baseball. He attended Rockhurst University where he received a BSBA in Finance/Econ and a minor in Philosophy in 2000 and then received an MBA in 2004 with an emphasis in Management and Marketing.

Jonathan's coaching experience includes Rockhurst University Pitching Coach from 2002-2004. He was also the graduate assistant obtaining an MBA while coaching. He has been a personal trainer for over 10 years with various facilities. In 2008, Jonathan assisted Brad Willis with the BC-14 year old team.

Jonathan's professional experience includes being drafted in 2000 in the 26th round by the Houston Astros. He played with Houston in the minors for two seasons until an injury ended his professional career. He was released the Spring and then proceeded to play independent ball in Texas with the Edinburg Roadrunners in 2002. In 2003, he began a 5-year career with the Kansas City T-Bones.

In the early 1970s, the Royals established a Baseball Academy to locate and train prospective baseball players at an early age.

Frank White was the best player to come out of the academy, and the only one to have a long big league career.  In his first 11 seasons as a regular, the Royals advanced to the post-season seven times. In 1980, Frank was named Most Valuable Player of the American League Championship Series, when he hit .545 with six hits and three RBI in Kansas City's three-game sweep of the Yankees. White spent all of his 18 seasons as a member of the Royals, earning five All-Star berths and a Silver Slugger Award to go along with his defensive honors. His range on artificial turf was unmatched in his era 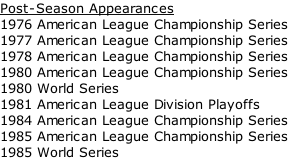